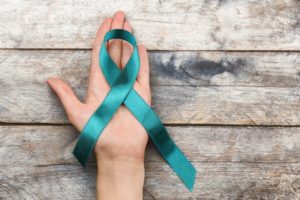 If you happen to notice any women and men sporting large amounts of teal at any point this September, it’s likely because they are participating in the effort to bring attention to the prevalence of ovarian cancer during the month dedicated to awareness of this “silent killer”.

Of the several different types of gynecologic cancers that affect women, ovarian cancer is considered among the deadliest. As noted by SLOCA (St. Louis Ovarian Cancer Awareness), “nearly 22,000 women are diagnosed with the disease annually” and “nearly 15,000 women will die of it” each year. END_OF_DOCUMENT_TOKEN_TO_BE_REPLACED